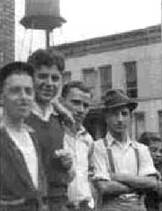 St. Therese was the first Chinese Catholic Church in Chicago, named after the patron saint of the missions.

Appropriately, the St. Therese community reflected that missionary calling from its very beginning. Its history intertwined with an Italian immigrant congregation dedicated to the patron saints of specific Italian regions, most notably Santa Maria Incoronata (Patroness of Ricigliano) as well as St. Rocco and St. Christopher.

Worship space for that Italian community traced back to a small chapel opened in 1899 at St. John’s Church (18th and Clark). The congregation quickly expanded and relocated to a new church building at 218 W. Alexander Street, dedicated in 1904.

That location would become the permanent home to St. Therese, but not for another half century. In the meantime, the mission work of organizing Chicago’s Chinese Catholics formally began. Rev. John T.S. Mao, a native of Nanking, China, set up instruction classes, rented a store at 2302 S. Wentworth, and began St. Therese Mission on September 11, 1940.

In January 1941, a Chinese Social Center opened in a building at 2311 S. Wentworth Avenue and the St. Therese Chinese Catholic grade school opened in September 1941 (at 22nd and Wentworth). The first graduates of St. Therese School received their diplomas on June 14, 1942.

St. Therese Chinese Mission was relocated to 2311 S. Wentworth in 1945, with the chapel dedicated April 8. In 1947, Samuel Cardinal Stritch formally designated St. Therese as a national parish for the Chinese in the Archdiocese of Chicago.

In 1952, the Maryknoll Sisters were invited to assume responsibility for St. Therese School. As the number of Chinese students increased through the decade, the need for a larger, permanent school building became clear. Groundbreaking took place on September 13, 1959. 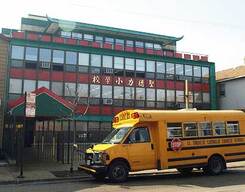 On April 30, 1961, Cardinal Stritch blessed the facilities at 249 W. 23rd Street, which contained ten new classrooms and a convent to serve 300 Chinese students and their Maryknoll Sister faculty.

The architectural firm of Kefer & Cronin designed the modern glass and steel structure in a Chinese style. The New World newspaper commented at the time that: “Written in gold in Chinese characters across the front of the building are Holy Virtue Little School (“Holy Virtue” are the Chinese words for St. Therese.)” In 1962, the St. Therese School building was awarded a citation of merit for excellence in architecture. Other awards would follow.

To help defray the new facility building expenses ($380,000), the 2311 S. Wentworth St. Therese Chinese Mission property was sold. The Italian community offered to share the rectory and basement auditorium of Santa Maria Incoronata with the Chinese Catholics. This began a moment of combined cultural traditions starting with the first Chinese Mass at the church on September 4, 1960.

In 1963, Santa Maria Incoronata parish was consolidated with the mission of Santa Lucia (at 3022 S. Wells), as many Italian families who lived in the vicinity of 24th Street had moved further south, displaced by construction of the Dan Ryan expressway. 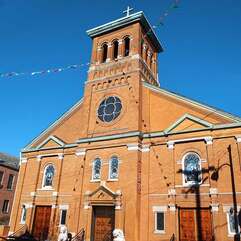 The Santa Maria Incoronata church building was passed on to become St. Therese Chinese Mission. Connections to the Italian community remained, though, including: honorary designation by the City of Chicago of Alexander Street as Madonna Incoronata Street; the presence of the shrine of Santa Maria Incoronata at St. Therese; and the annual Procession and Feast of St. Rocco each August by the Society of San Rocco di Simbario.

For the next half century, St. Therese Chinese Catholic Parish remained committed to its missionary work, welcoming succeeding immigrant generations into the Catholic faith.  St. Therese School continued its education mission, building a well-respected reputation. It was twice awarded National Blue Ribbon School of Excellence status by the U.S. Department of Education (2011, 2018).

In 2019, St. Therese Chinese Catholic Parish was combined with St. Barbara Parish to form St. Mother Teresa of Calcutta Parish, with both locations retaining the name of their individual church buildings. The school added a second location at the St. Barbara campus.

As such St. Therese was once again part of combined cultural traditions, embracing the mission opportunities offered to all who stepped through the doors into this dedicated Catholic community.
©St. Mother Teresa of Calcutta Parish

Site powered by The Archdiocese of Chicago