A Century of Christian Caring

Pastor Rev. Stanislaus Nawrocki
St. Barbara parish began more than a century ago, as great steamship lines were docking at Ellis Island, unloading wave after wave of Polish immigrants. At the beginning of the twentieth century, these new arrivals were looking for a better way of life, looking for freedom from Russian army conscription and from restrictions on their language and religion. Thousands headed for Chicago and Bridgeport, where the mills, factories and packing houses provided plenty of employment.

His first priorities were an elementary school, convent, and rectory. Mass and the sacraments were celebrated in the basement hall of the school while construction went forward on the church. 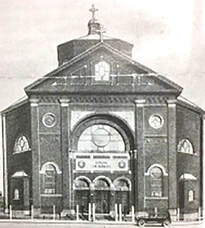 St. Barbara Church, 1914
The domed, Renaissance-style church took two years and $175,000 to build. No pillars were used in the interior so sight-lines would be clear for the 1,200 worshippers that could be accommodated. A solemn dedication and consecration took place July 5, 1914.

Architects Henry Worthmann and J. G. Steinbach (one born in Germany, the other in Austria) adapted the prevalent style of 16th Century Europe for many Chicago congregations. Among their well-known other works are St. Mary of the Angels, St. Hyacinth, Our Lady of Lourdes, and St. Nicholas Ukrainian Catholic Church. Our Lady of Tepeyac (originally known as St. Casimir) is a virtual twin to St. Barbara. While not in the Renaissance style, First Lutheran Church of the Trinity in Bridgeport is the closest neighborhood example of another Worthmann and Steinbach design.

As soon as the St. Barbara school was built, the Sisters of St. Joseph of the Third Order of St. Francis entered and ministered to the many immigrants adjusting to life in America. After World War I, new arrivals nearly doubled the population of the parish. 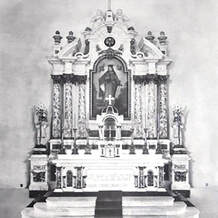 During the Roaring Twenties, the Depression, World War II, and the lengthy post-war Baby Boom, St. Barbara provided a spacious social center for all ages. Each generation brought its own traditions to the parish family, welcoming new faces from all parts of the world, as St. Barbara expanded its outreach efforts during the 1990s.

As part of a major restoration effort in the 1990s, St. Barbara cleaned, repaired, and fully restored its impressive display of stained glass windows. The parish placed four additional stained glass scenes in the front church towers in 1999, replacing plain glass panes. These new windows had been in storage since their original home at Niles College Seminary had been demolished.

In 2001, despite its excellent academic performance, St. Barbara High School closed, no longer able to maintain the necessary enrollment levels to ensure fiscal viability. However, the portions of the building previously used by the high school were then adapted to enhance the offerings by St. Barbara Elementary School, including additional facilities for science, technology, and the arts. 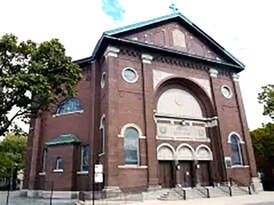 The renovated St. Barbara Church
St. Barbara successfully marked its centennial in 2010 as a time of spiritual and physical renewal. That included the painting and restoration of the interior of the church by the Oosterbaan & Sons company in 2012. Those efforts continued through the decade, including installation of polished wood flooring in the main and side altar sanctuary areas.

In 2019, St. Barbara Parish was combined with St. Therese Chinese Catholic Parish to form St. Mother Teresa of Calcutta Parish, with both locations retaining the name of their individual church buildings.

As such, the artistic treasure that is St. Barbara Church continues to welcome all who step through the doors into this dedicated Catholic community, whose heritage encompasses Europe, Asia, Africa, and Latin America.

Site powered by The Archdiocese of Chicago